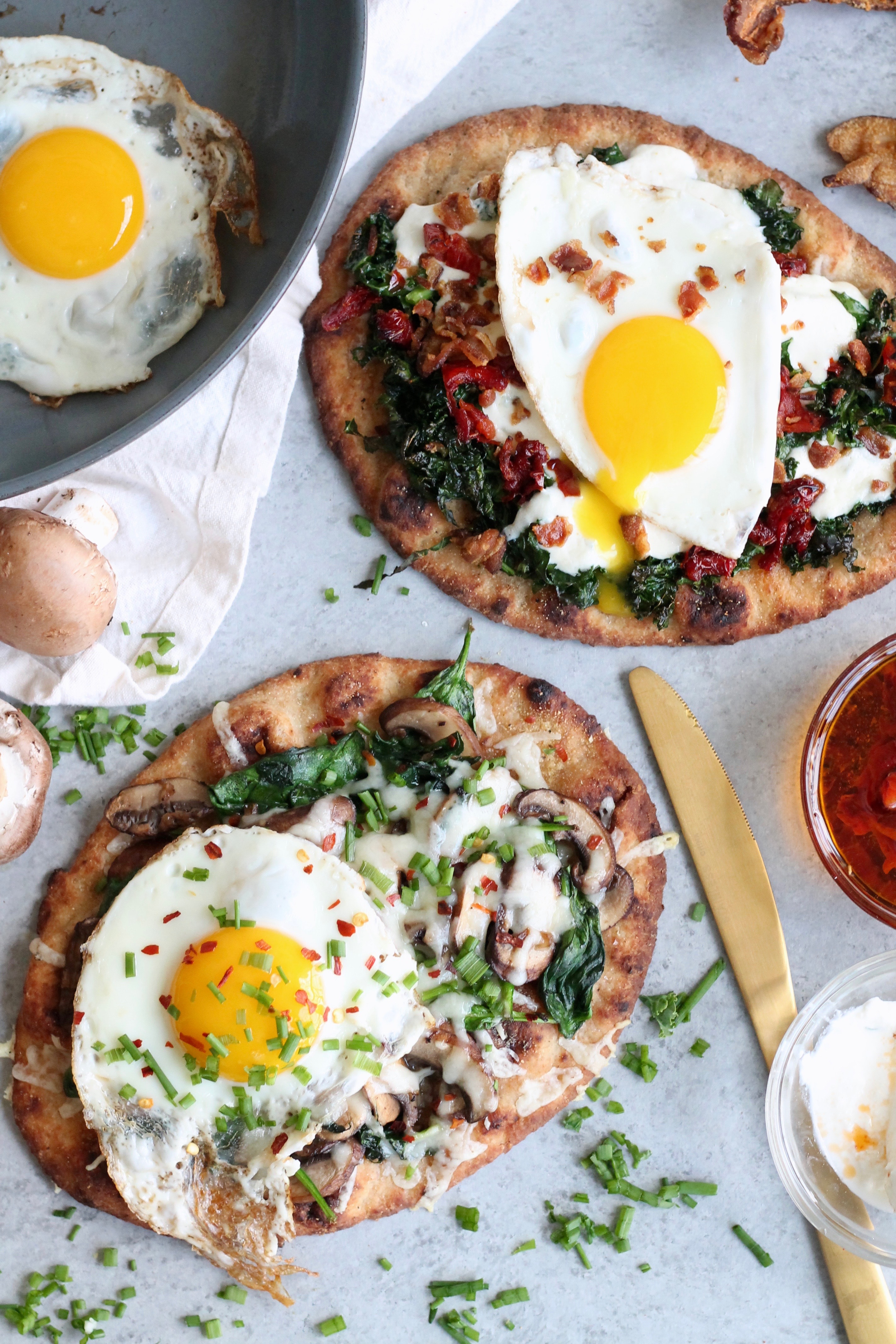 Pizza for breakfast! It’s happening. In “personal pan” size likewise! Everything is ameliorate when y'all don’t accept to part, amiright?! I ever brand others part, because I ask to endeavour everything. Can yous relate? These would live absolutely perfect for a fun weekend brunch with friends, or even breakfast for dinner! I’1000 ever upwardly for that. 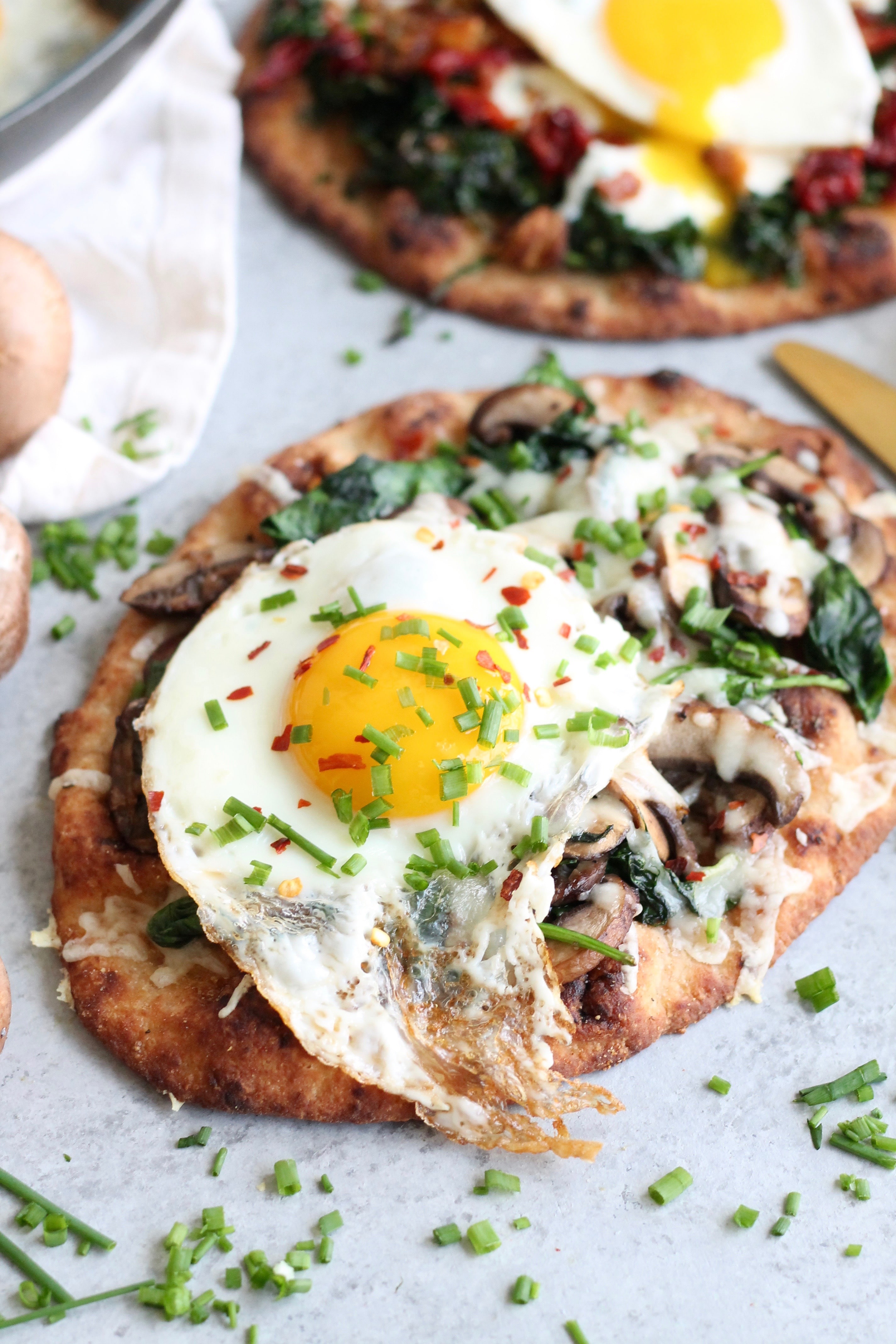 I really don’t know if I could selection a favorite. These are both SO delicious! I am a sucker for burrata, especially on pizza. Its ridiculous creaminess in addition to saltiness is but to decease for. I dearest the mushroom one likewise though! Don’t brand me select. 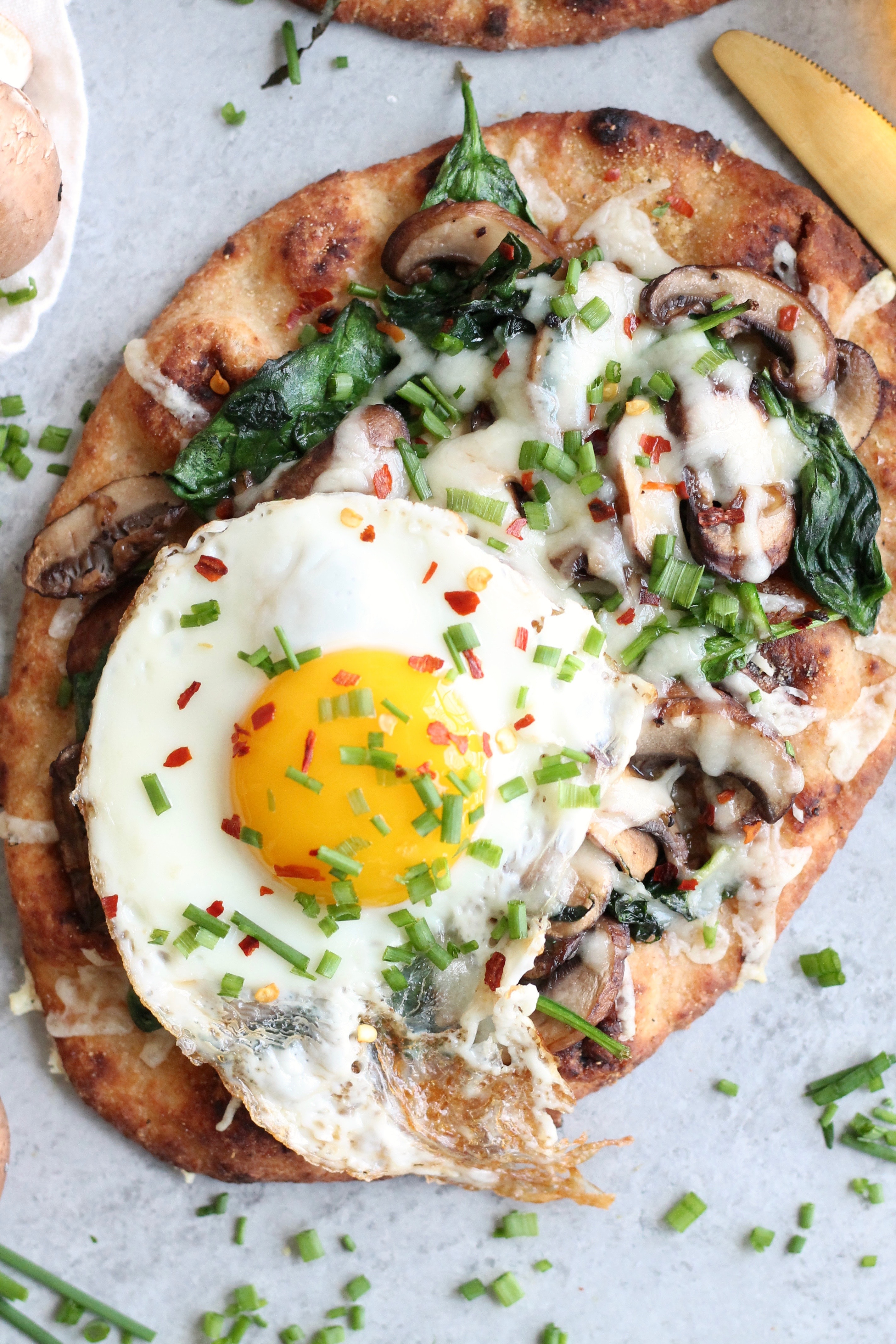 First upwards is this garlicky mushroom spinach pizza alongside white cheddar, chives, as well as a runny egg of form. I dearest the oniony garlicky flavor of this ane mixed amongst the sharp white cheddar. And the runny egg but puts it over the edge, like they ever do!

You tin can do poached eggs, over slow, over medium, or however you lot like them best. I fried mine inward a little avocado rock oil too the bottoms got nice and crispy piece keeping the yolks runny. So skilful! 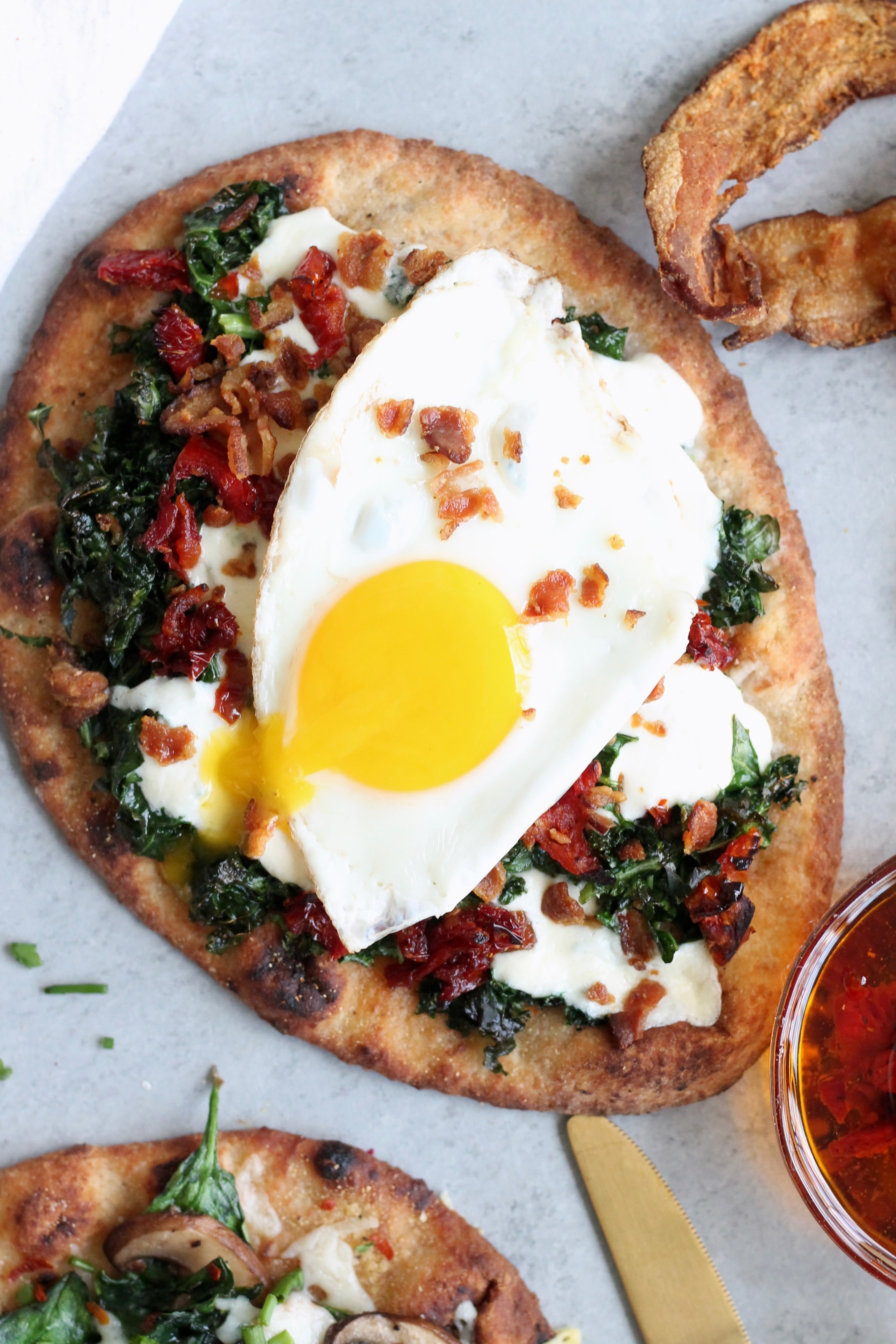 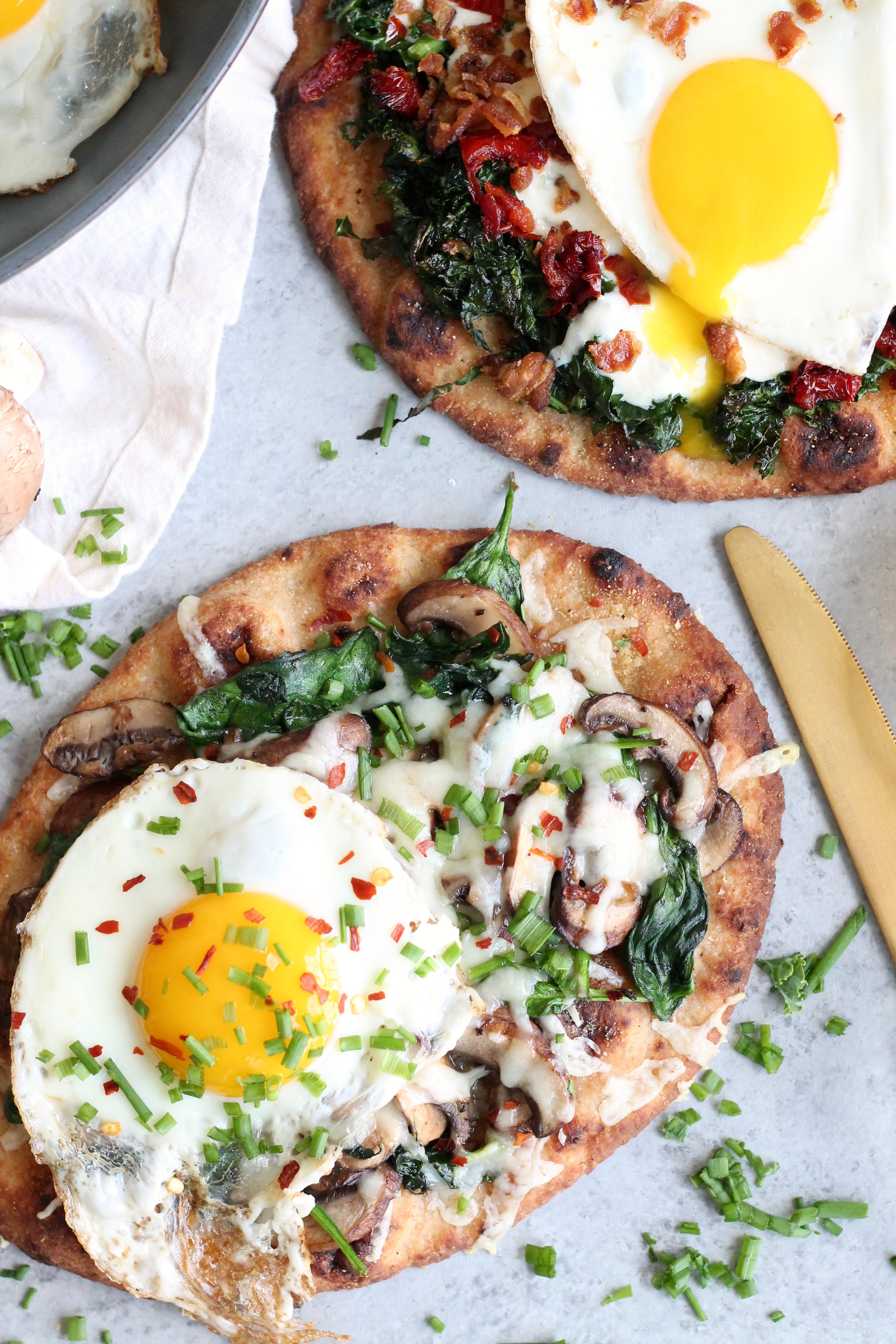 I beloved using the naan bread for making simple pizzas when I don’t accept time to brand my dough from scratch. I used a whole wheat version here, merely any volition make! They really become crispy inwards the oven which I LOVE.

The play tricks is to bake the naan for five minutes, so set your toppings on, bake over again, as well as broil for the terminal two minutes. The bottom gets only the correct sum of crispy, as well as the cheese gets just the correct total of golden. 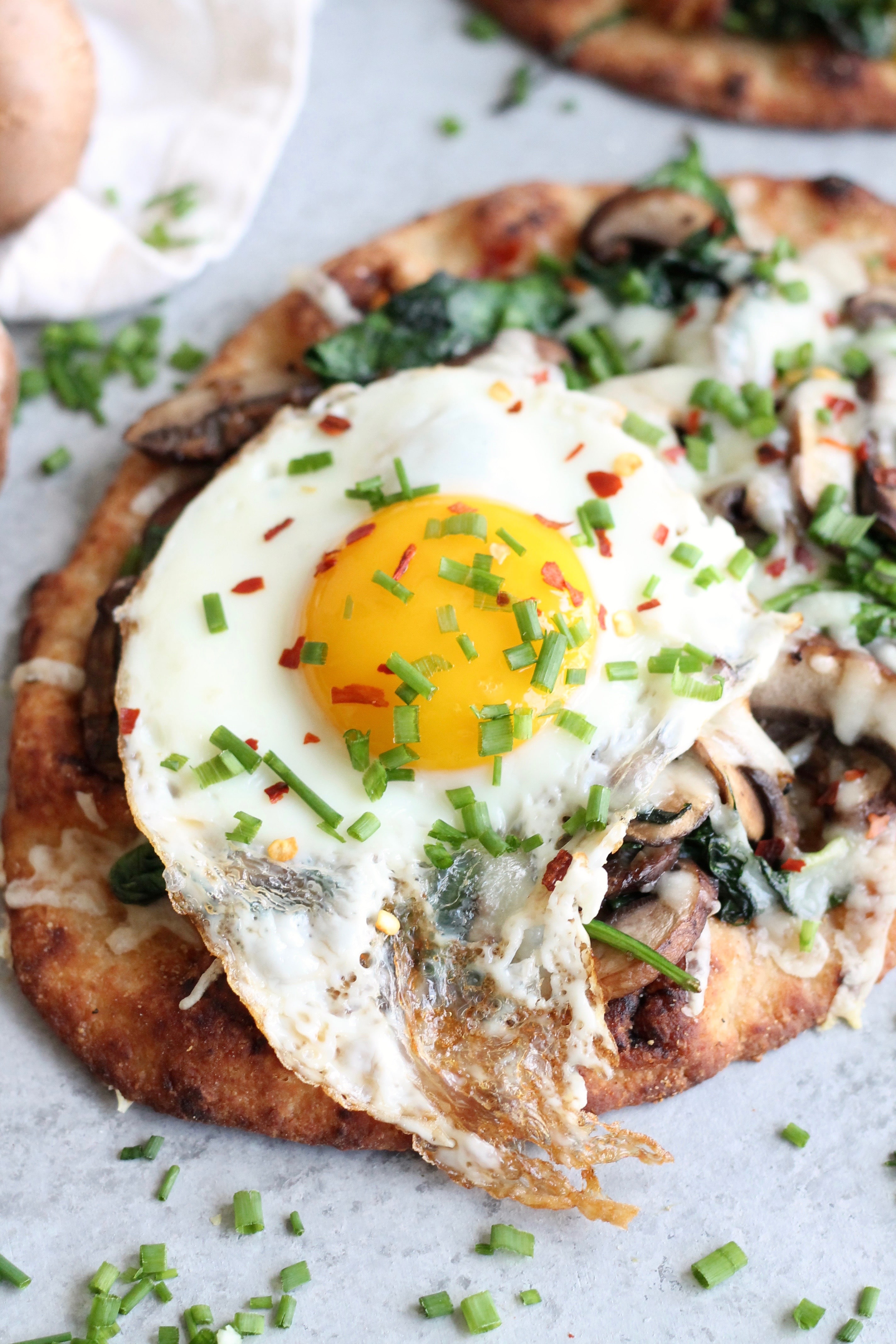 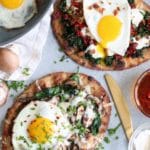 These breakfast naan pizzas are a super delicious together with easy to make! One version is made amongst garlic mushrooms, spinach, too white cheddar, and the other version is made with kale, bacon, burrata, in addition to Sun-dried tomatoes!


For the kale bacon burrata pizza

For the kale bacon burrata pizza

*It'second easy to prep together with bake these at the same fourth dimension, I just divide upward the directions inward instance y'all just wanted to brand one!